How to Draw a Scottie Dog 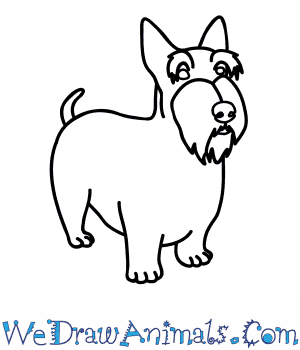 In this quick tutorial you'll learn how to draw a Scottie Dog in 8 easy steps - great for kids and novice artists.

At the bottom you can read some interesting facts about the Scottie Dog.

How to Draw a Scottie Dog - Step-by-Step Tutorial 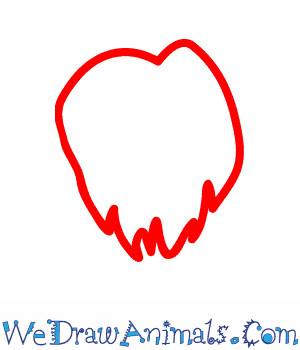 Step 1: A Scottie Dog is a fuzzy, friendly small dog that likes to sit on people's laps. Let's start by drawing his fuzzy face hair, by making its outline! First draw two humps, that meet in the middle, on top. Then draw two lines going down from either side of the humps you drew, curving slightly towards each other. Then make a jagged line that goes down from one side, then up to the other, to imply a fuzzy face. 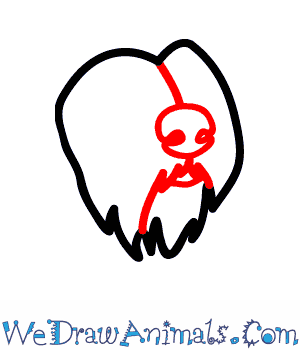 Step 2: In the divot between the two humps you drew, draw a line that goes down and to the right. At its end, make an oval that has two circles inside of it to make the nose. Then draw a jagged curved line beneath that to make the lips, and a small line below that jagged line to make the lower jaw. 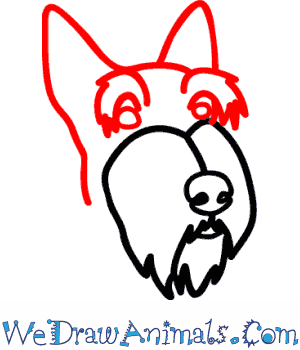 Step 3: Now let's draw the ears, eyes, and head. Start with a line that begins just to the left of the shape you've drawn, that goes up, curving slightly to the left. It should then go straight up, and turn at a point, slanting down and to the right to make the first ear. Then make a curved line to draw the top of the head. About midway through that curved line, put in a line another curved line that goes to the right, before coming to a point. After the point, it should curve down. On either side of the top of the head you've drawn, draw two jagged dome-lines to make the big bushy eyebrows. Then put a circle beneath those lines to make the eyes. 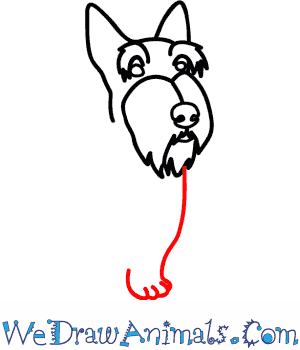 Step 4: To draw the chest and right-front leg, make a line that starts just beneath the chin, and goes down, before curving back towards the left for a moment. It should then curve to the right and around to make the foot, coming back up to make the back side of the first leg. At the bottom of the foot, put in a few lines to make toes. 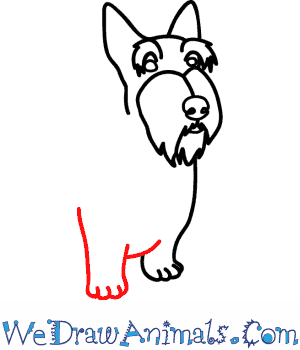 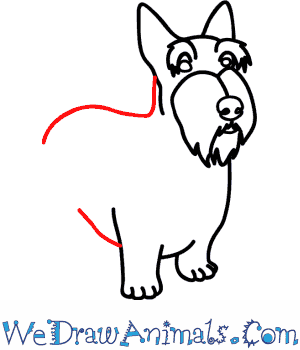 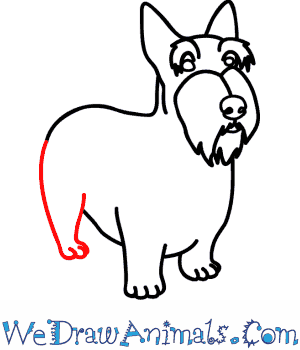 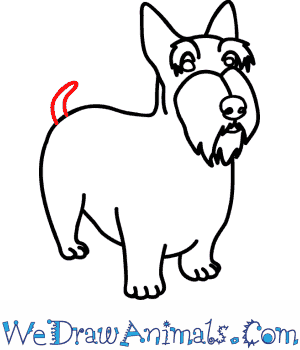 Step 8: Now put in a small tail, by making two lines that start near each other on the rear hump. The lines should curve up and to the right, and come together in a rounded tip.

Scottish terriers, simply called Scotties, are small dogs with short legs. They are known for their short, shiny black or brindle coats. They have long hair around their mouths that look like an overgrown mustache. Scotties were developed in Scotland in the 1700s; they were originally called the Aberdeen terrier.

Scotties have a reputation of being stubborn, feisty dogs. When training them as pets, owners have to be firm with them, or they will dominate the house. Humans need to establish that they are the leaders so that the pet will be obedient. Scotties are also known to be loving pets that are quite active indoors. They do not need a yard to play, but they should exercise daily. 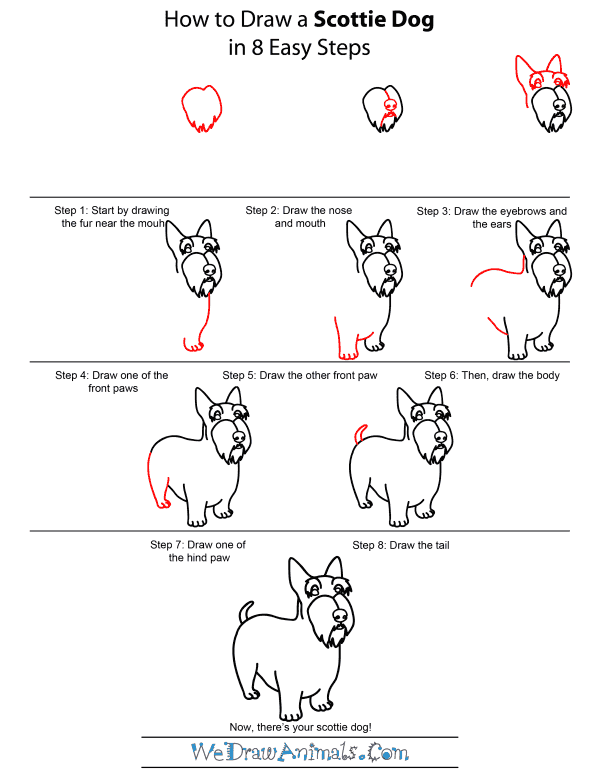 How To Draw A Scottie Dog – Step-by-Step Tutorial