How to Draw a Swallowtail

In this quick tutorial you’ll learn how to draw a Swallowtail in just a few quick steps, but first…

Interesting Facts about the Swallowtail Butterfly

The Swallowtail Butterfly is a member of the insect family and the scientific term for them is Papillio schmeltzii. A swallowtail species may get its name from the fact that birds who try to eat the butterflies with a tail, will only swallow the tail, so that this insect can survive the attack. The tail on a butterfly only slightly attaches to the wing and is brittle, making it easy for the insect to escape when a bird bites it. This strategy is similar to how a lizard detaches its tail to avoid being eaten by a bird. The binomial name is Latin for “butterfly” (Papilio) and “Johann Schmeltz” (schmeltzii), which credits the person responsible for inspiring this particular insect.

These animals are black with white stripes, having blue and orange spots on the wing’s edges. When the baby makes a pupa on a plant’s branch to transform from its caterpillar stage, it appears as a new leaf unfolding. Since there are so few of these creatures, they are threatened with the possibility of extinction.

How to Draw a Swallowtail – Step-by-Step Tutorial 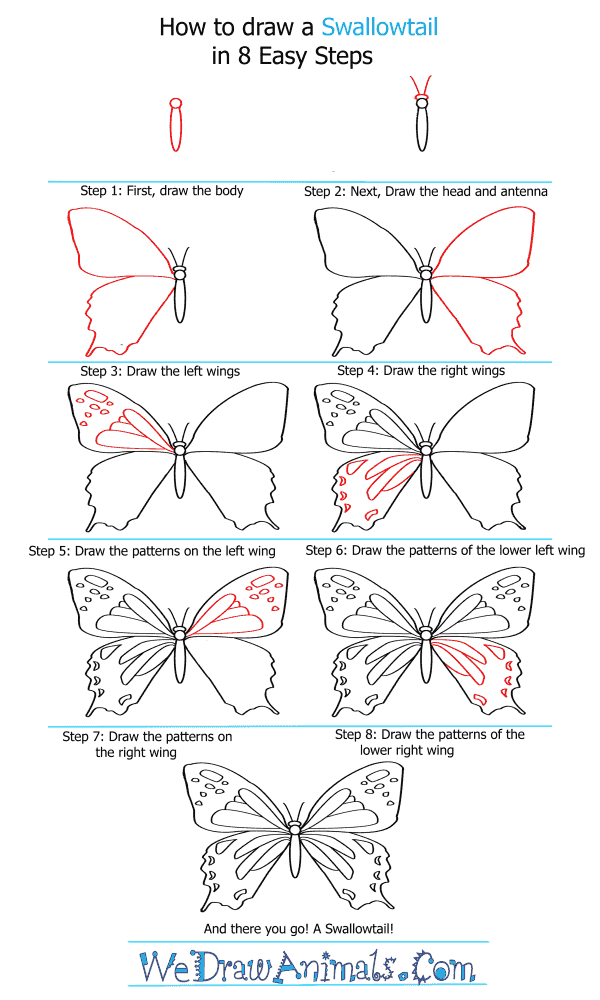 How to Draw a Swallowtail – Step-by-Step Tutorial