How to Draw a Barred Owl 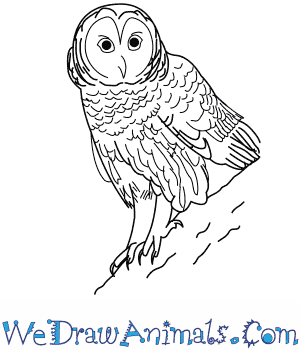 In this quick tutorial you'll learn how to draw a Barred Owl in 10 easy steps - great for kids and novice artists.

At the bottom you can read some interesting facts about the Barred Owl.

How to Draw a Barred Owl - Step-by-Step Tutorial 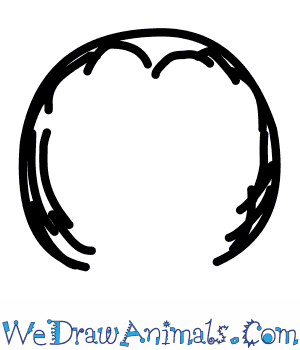 Step 1: To draw your barred owl, you will have to first draw its head. To draw the head, draw a circle with a feather pattern on the inside. 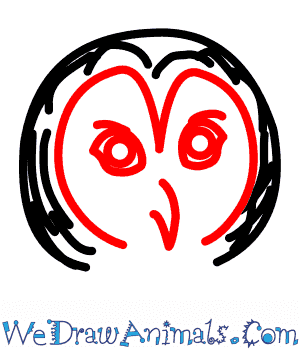 Step 2: Next you will need to draw the owl's face. Start with the eyes by drawing a small circle surrounded by a larger circle and then a semi circle. Then draw a heart shaped pattern just inside the head, finally use two curved lines to create the nose. 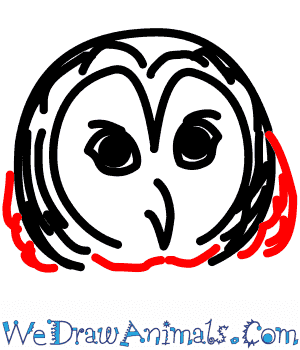 Step 3: Now you will want to draw the neck feathers by drawing jagged lines below the head. 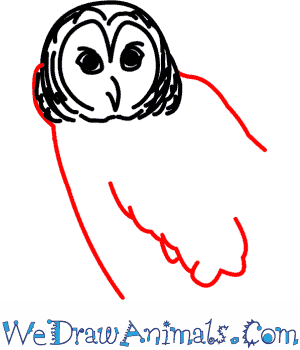 Step 4: The next step is to draw the body. Start by drawing a curved line coming down from the side of the face. Draw a shorter one coming out of the other side. Draw a jagged hooked line in the middle of the body for the wing. 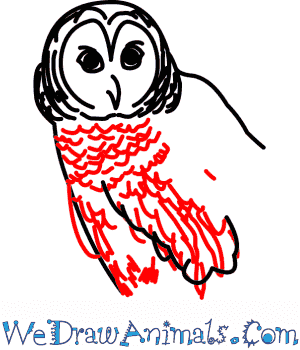 Step 5: Next you will want to add the tail and body feathers by drawing horizontal an vertical bumpy lines to create the pattern shown above. 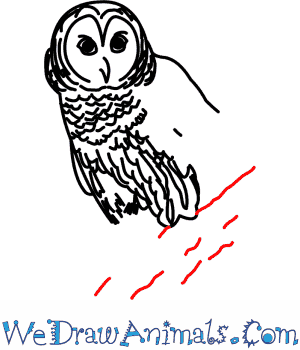 Step 6: Now draw the slanted rock. To draw this, draw wavy lines in three rows at an angle. 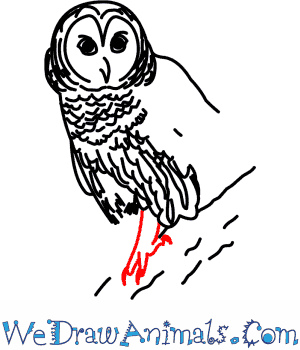 Step 7: The next step is to draw the leg. Use angled lines to form the leg and the three toes. 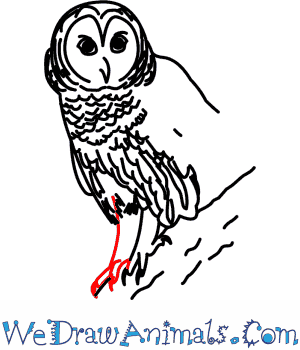 Step 8: Draw the other leg in front of the first one using the same angled lines. 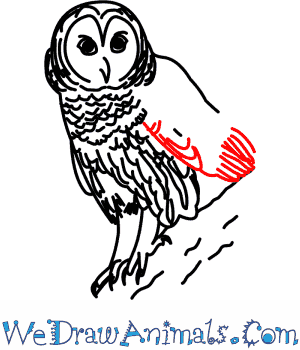 Step 9: Now you need to draw the wings. The wings can be created using several semi circles, some lining the top and the others the side. 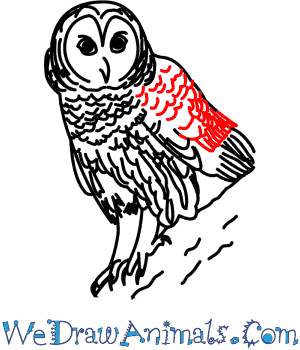 Step 10: Finally you need to draw the feathers on the wing. Using curved and straight lines create the pattern shown above. You now have drawn a Barred Owl.

Barred Owls are a tree dwelling bird that stake out their territory and stick to it. They live in forests and dense tree filled areas. Barred Owls are a very common owl in the mid-United States and east coast. They measure between 17 – 20 inches long and have a wingspan of 39 – 43 feet. They have big black eyes and heart-shaped faces. A Barred Owl is greyish in color with brown stripes on its chest; this helps them blend into a tree so they can hide from predators. They also have sharp beaks for hunting and sharp talons for grabbing hold of things. Once a Barred owl finds a home they generally stay in the same place. The only thing that will force one of these owls to move is a predator or no food. Speaking of food, owls have an interesting way to eat. Any owl will swallow its food whole and let its stomach sort out the mess. When the meat is gone, then the owl will hack up the fur and bones out in a furry pellet.

Lesson Plan Note: Gather up art supplies such as paper, colored pencils, paints, and markers. Then ask the students to draw where they think Barred Owls live. Display the drawings for everyone to see.

How to Draw a Barred Owl – Step-By-Step Tutorial