How to Draw a Puffer Fish 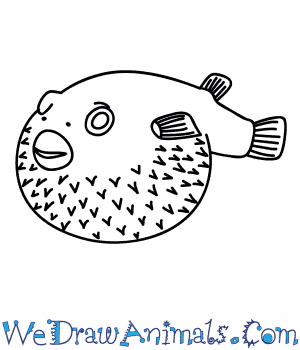 In this quick tutorial you'll learn how to draw a Puffer Fish in 5 easy steps - great for kids and novice artists.

At the bottom you can read some interesting facts about the Puffer Fish.

How to Draw a Puffer Fish - Step-by-Step Tutorial 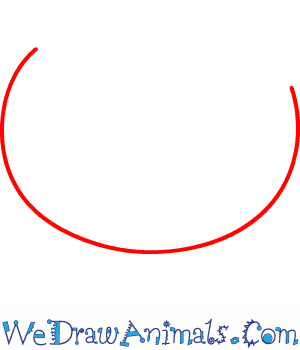 Step 1: Draw the Puffer Fish's body by making most of a very round circle. Leave a gap at the top where we will draw his face and fins later. 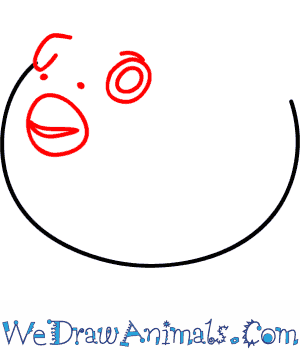 Step 2: For the left eye, draw a looping line that almost meets itself just above the left side of the circle you've drawn. The right eye is just to the right of that one, and is two circles, one inside of the other. Then draw a small curve above that line to imply a pronounced shape. To make the mouth, draw an oval below and between the eyes. Put two lines that meet at their ends within the circle to make the lips. Put in two dots to make nostrils between the eyes and the mouth. 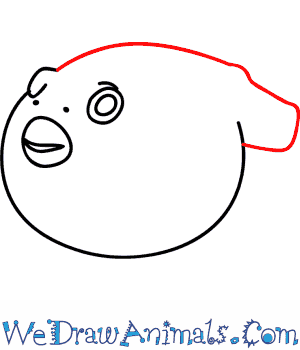 Step 3: Draw the rest of the body with a curved line that starts above the left eye, and goes up and to the right, before curving down. Soon after the curve make a small bump where we'll draw a fin later, then finish the slant. At the end of the slant, draw a round corner that goes down and slightly to the left, before adding another corner, and a line that goes let, and slightly up to meet with the rest of the body. 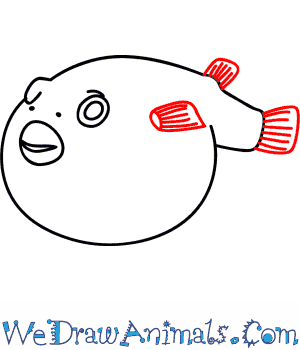 Step 4: Now put in the fins. One is on the bump you left before, and should be a small rectangle that goes up and to the left. Another broader rectangle should be put on the very back, pointing to the back. Next put in one last rectangle with an oval on its left side to the right of the eyes, to make the side fin. Lines should be drawn that go from the body out to the tip of each fin to make give texture. 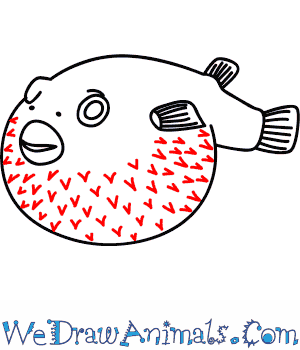 Step 5: For the last step, put small V shapes all over the lower half of the body. The tip of each V should be pointing towards the outside the body wherever they're put, not just straight down. This will make the spines that Puffer Fish are known for.

Puffer fish got their name because they can “puff up” into a shape of a beach ball. They are also called blowfish. They inflate themselves by filling their elastic stomachs with lots of water and some air. They do this to scare off predators. 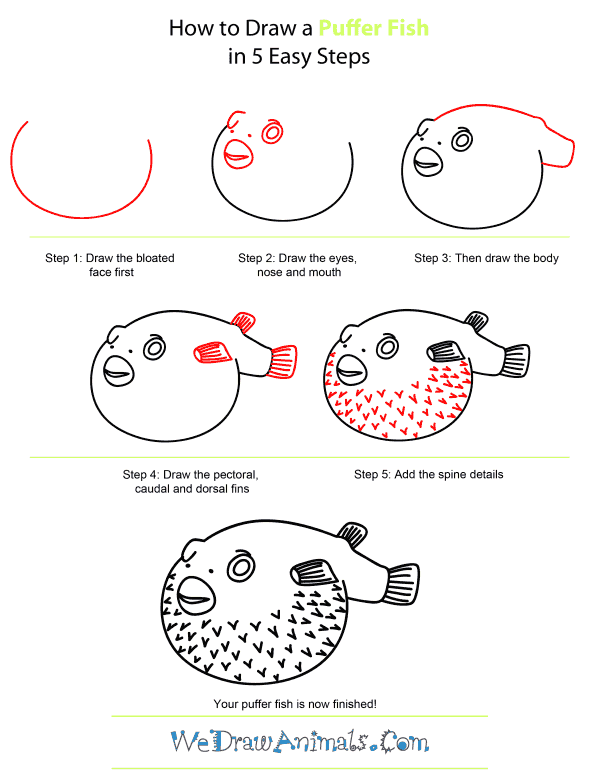 How To Draw A Puffer Fish – Step-by-Step Tutorial